Golden berries are a component of traditional medicine and were grown as early as 4000 years ago. They belong to the nightshade family and have a sour, acidic flavour. Golden berries are poha, Inca, Peruvian ground cherry, cape gooseberry, and husk berries. These fruits are typically eaten fresh (in salads) and as jams, jellies, pies, and fruit-based sauces. Golden berries have a strong nutritional profile, and the following part offers an insight into the nutritional breakdown. 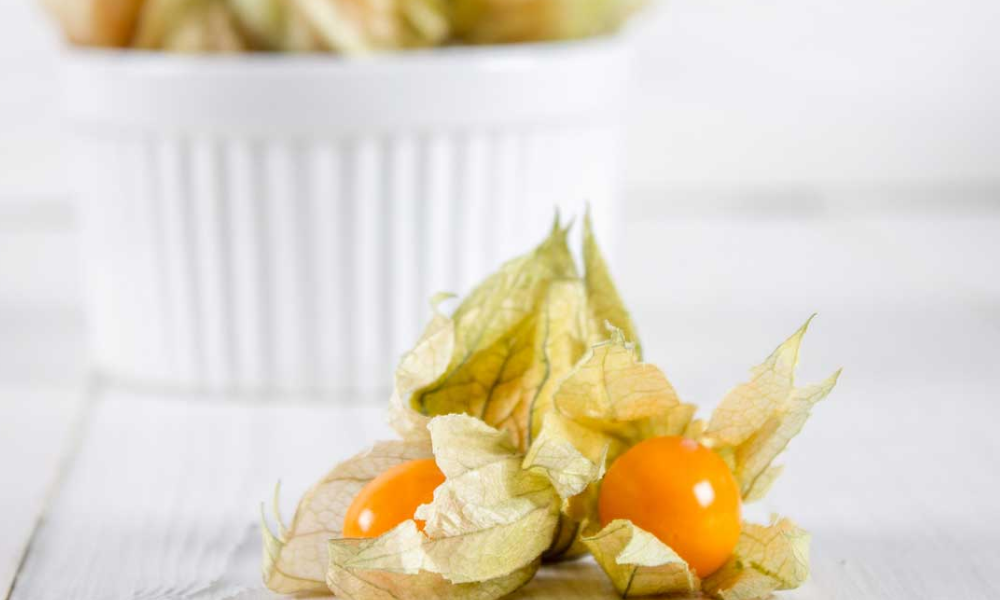 When you see golden berries tucked away in their somewhat sticky tiny paper husk leaves, it makes sense that they are a member of the nightshade family, which is related to the tomatillo (which needs to be removed before eating). The Andes Mountains in South America are where they were first cultivated. These days, they are grown in more moderate regions, and Mexico is home to several different kinds and a sizable crop.

What are Golden Berries?

The golden berry is a bright orange fruit linked to the tomatillo in a very close way. They are encased in a calyx, a papery husk, and similar to tomatillos, You Must remove this husk before consumption. These fruits have a sweet, tropical flavour that is somewhat evocative of pineapple and mango, and they are just slightly larger than cherry tomatoes.

A golden fruit has a flavour that not everyone will like. It is sour and tangy because it is acidic and tastes somewhat savoury and not excessively sweet like tropical fruits like mango and pineapple, with a hint of vanilla.

Due to their high nutritional content, golden berries are considered a super food with several health advantages.

Decrease the Level of Inflammation

Because of their ability to reduce inflammation, golden berries have long been used in the practice of traditional herbal medicine. The University of Cartagena in Colombia carried out research in which they showed that the anti-inflammatory properties of golden berries protected rats from developing colitis, which is an inflammatory response that occurs in the colon.

In addition, the ethanol extracts of golden berries have immunomodulatory effects, which means that they can prevent the immune system from releasing pro-inflammatory mediators (chemicals that promote inflammation) in the body. These extracts can do this because golden berry ethanol extracts have immunomodulatory effects. Additionally, golden berries contain chemicals such as genocide, which can potentially suppress the proliferation of cancer cells, especially colon and breast cancer cells.

The consumption of golden berries lowers one’s likelihood of developing pulmonary inflammatory disorders brought on by smoking. In yet another study, researchers showed that the chemical compound known as 4beta-Hydroxywithanolide, which is present in golden berries, may inhibit the growth of lung cancer cells. However, further research on humans is required to grasp the cancer-fighting potential of golden berries fully.

Golden berries have a high concentration of antioxidants and can quell the damaging effects of free radicals, also known as reactive oxygen species. Free radicals are one of the primary contributors to a wide range of health conditions, including cardiovascular disorders.

The extracts of golden berries made with ethanol and acetone have the greatest levels of antioxidants. They can reduce oxidative damage in neurological illnesses (such as Alzheimer’s disease and Parkinson’s disease). However, further research is necessary to comprehend people’s neuroprotective benefits when consumed by golden berries.

Goldenberries also include phytosterols, which are beneficial for decreasing LDL cholesterol and may be found in the fruit.

Beneficial to the Immune System

Goldenberries may cause immunomodulatory effects. They contain a high concentration of polyphenols, which can prevent the production of specific inflammatory, immunological markers responsible for inflammation throughout the body. Goldenberries are an excellent source of vitamin C, which is essential to the creation of collagen, as well as the repair and maintenance of cells and the immune system. Nevertheless, further research on humans is required to substantiate this assertion. Take Better Care of your Eyes

Carotenoids in goldenberries enhance vision, decreasing oxidative stress on the ocular (visual) system, and protecting against vision-related disorders such as cataracts and macular degeneration. In addition, they contain lutein, which has been shown to protect against age-related macular degeneration.

May Contribute to Better Bone Health

Goldenberries are a good source of vitamin K, a substance that dissolves in fat and is important for bone health. According to the findings of research carried out by the Technical University of Berlin (located in Germany), the presence of vitamin K in goldenberry oil helps stimulate bone metabolism (the development, tissue creation, and maintenance of bones). However, further research is required to fully grasp the advantages of goldenberries for people in terms of bone health.

May Assist in the Management of Diabetes

There is some evidence that goldenberries may help control type 2 diabetes. This is because they contain few calories and moderately impact one’s blood sugar levels. They may manage diabetes and obesity more effectively with their help. Native diabetics in Kenya’s indigenous communities often treat their condition using phytomedicines derived from plants like goldenberries. However, little research has confirmed that goldenberries have anti-diabetic qualities.

Research on animals demonstrates that the beneficial substances included in goldenberries, such as phytochemicals, may protect the liver from oxidative damage and injury. Goldenberries’ phenolic components and vitamin C have lower cancer risk. Additionally, goldenberries include linoleic and oleic acids, which lower the risk of coronary heart disease (CVD).

How do you Eat Golden Berries?

Are Golden Berries a Tomato?

There is a familial similarity with toms: when you slice open a golden berry, you can see that it is filled with small seeds. May eat, and Toms are related to golden berries. Image attribution. Golden berries and tomatoes are parts of the plant family Solanaceae, which also includes potatoes and aubergines. However, golden berries are more well-known than tomatoes.

Can Golden Berries be Cooked?

You may make golden berry jam by heating the berries in a pan with chia seeds and adding a dab of honey or maple syrup. Makes an excellent topping for waffles, pancakes, and French toast. On top of oatmeal, dried golden berries and walnuts make a delicious combination to try. Include some golden berries, either fresh or dried, as the topping for your go-to salad.

Are Golden Berries & Gooseberries the Same?

How do you Know When Golden Berries are Ripe?

Try to get fruit that does not have any green colouring on it, that is firm but has a little give to it, and that has a bright golden hue. That indicates that they are ready to eat. They will have papery husks that have dried up around the berries, and you will need to remove them before eating them. The size of these things is comparable to that of tiny tomatoes.

Although goldenberries have the appearance of a plump, yellow raisin, this sour, nutrient-dense superfood is in no way related to raisins. It has a high concentration of various nutrients, such as beta-carotene, bioflavonoids, fibre, protein, and vitamin A. These are all vital components of a SuperLife.

It is to be expected for golden berries to have a slimy texture. The skin’s oily texture is partly caused by the high-weight carbohydrates that preserve the developing berry. Linoleic acid and seed oil combine to give golden berries their characteristic slimy, sticky surface. It is possible that rotting has set in when there is an excessive amount of stickiness or when the look is particularly mushy.

Put them in the freezer if you cannot utilize them fresh! The season for berries is just around the horizon, and the best method to ensure that you have access to them throughout the year is to freeze them once they have been preserved.