One of the most important components in Japanese cuisine is katsuobushi or dried bonito flake. Katsuobushi, which is high in umami flavor, is used to make stock and a topping, garnish, and spice for everything from noodles to rice to eggs.

When used as a topping on delicacies like okonomiyaki and takoyaki, they are said to move or dance. If you become queasy when you see moving food, it can be a weird sight at first. It is, however, nothing to be concerned about. The bonito flakes move on the heated food due to their thin and light structure, but they are not living. 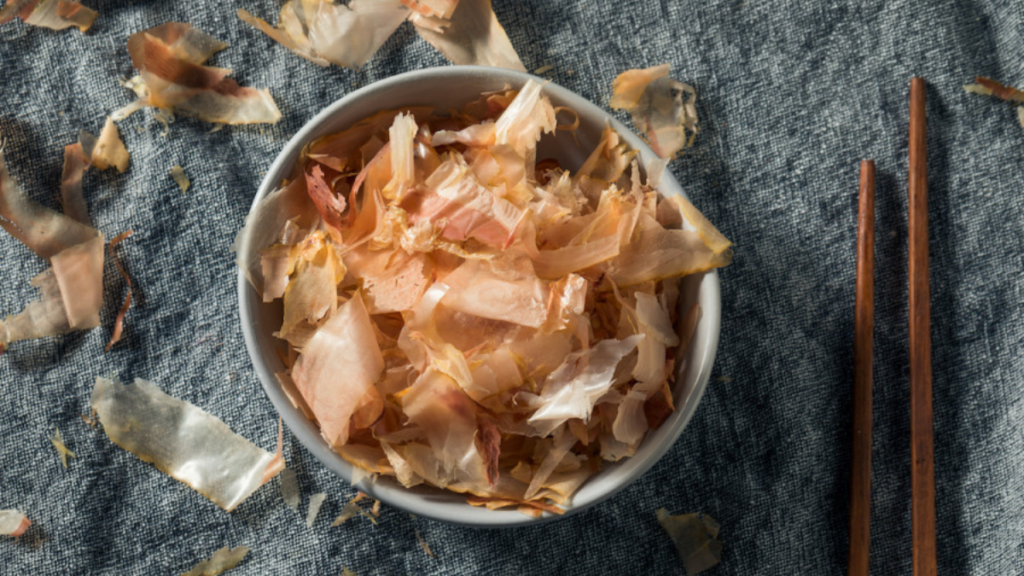 The flavor of bonito flakes is smokey, savory, and slightly fishy. Along with sweet, sour, salty, and bitter, “umami,” a source of savory flavor, is considered one of the five fundamental flavors. Glutamic and inosinic acids give bonito flakes their “umami” flavor.

Bonito flakes have a high inosinic acid content, adding depth and complexity to the umami flavor. The delicious flavor of bonito flakes is enhanced by its aroma. This unique aroma is produced by a long and intensive smoking and drying process (together with the mold used in the Karebushi bonito flakes fermentation process).

What is Exactly Bonito Flake?

Bonito flakes, also known as katsuobushi, are smoked, fermented, and dried bonito or skipjack tuna flakes. After cleaning and filleting the fish, the producers simmer and smoke it for a month before sun-drying it. A bacterial mold culture called Aspergillus glaucus is used to foster the growth of a protective mold that ferments the fish and absorbs any leftover moisture.

As the fish dries, the mold is scraped away and allowed to rebuild. Once the drying process is complete, the finished fish will resemble chunks of hard, petrified wood. Producers then shave the fish with a katsuobushi kezuriki, a sharp plane fitted into a wooden box. Commercially available katsuobushi is pre-shaved and packaged in a sealed bag; once exposed to oxygen, the shavings lose their airy shape and color, so it’s better to utilize them immediately. You can also keep katsuobushi in the freezer in between usage.

Katsuobushi comes in a few distinct grades, each with slightly different applications:

How are Bonito Flakes Made?

Grating dried bonito fish, prepare bonito flakes into flakes. It’s one of the key ingredients of dashi, a traditional Japanese stock used in practically all recipes. Here is the process of making bonito flakes:

How to Use Bonito Flakes? You can use dried bonito flakes in various Japanese dishes, either seasoning or garnishing. Here are some of its primary uses:

Katsuobushi has a meaty, savory flavor that is somewhat salty, smokey, slightly fishy, and intensely umami—a meaty, savory flavor. It’s almost like a cross between dried fish and dried bacon, or even smoked fish jerky, thanks to the smokiness; yet, because it’s sliced micro-thin, it’s practically feathery rather than chewy. It’s not uncommon for people to consume the flakes directly from the bag as a snack.

Where to Buy Katsuobushi?

If you reside near an Asian or Japanese grocery shop, you should be able to find dried bonito flakes in a variety of sizes and occasionally in bulk. They’re also available from a variety of merchants online. You may buy full katsuobushi blocks online, but keep in mind that you’ll need a box grater to shave them.

Dried bonito flakes are particularly resistant to bacterial decomposition due to the drying and smoking process, which is a method of food preservation. Dried bonito flakes will keep for six months to a year if kept cold and dry and stored in the resealable bag they came in or another airtight bag or container. In humid conditions, their shelf life may be reduced. Are Bonito Flakes Good to Eat?

Bonito flakes provide several health advantages. Protein, iron, niacin, and B12 are all important amino acids, and they’re abundant in them. They may also benefit brain and metabolism health and reduce the risk of ailments, including heart disease and diabetes.

Bonito is high in protein, and Katsuobushi has all the essential amino acids that the body needs for optimal health. Iron, niacin, and B12 are among the vitamins and minerals found. Regular eating of Katsuobushi, according to scientists, helps to boost brain function and metabolism.

Katsuobushi is a dried, prepared skipjack tuna that is an important component of Japanese cuisine. It’s used in various Japanese meals, but it’s particularly crucial for preparing savory stock dashi, which is the foundation of many traditional Japanese dishes.

Inosinic acid, a glutamine-based molecule that gives katsuobushi its savory umami flavor, is abundant. It’s one of the main ingredients in Japanese stock dashi and kombu. The complicated and time-consuming nature of katsuobushi manufacture adds to its complex flavor and high price. The typical procedure is trimming the lean portion of the loin, then slowly boiling, wood-smoking, and fermenting it with Aspergillus mold. Today, the fermenting stage is frequently bypassed, but it is theoretically required to make ‘genuine’ katsuobushi.